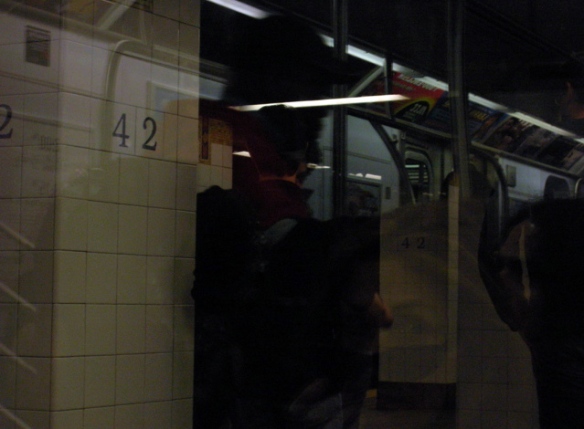 All dressed up, rushing, on my way to a special event, my train was delayed. There we were, stuck underground, waiting. When we finally got to Grand Central Station, the loudspeaker announced, “this train is going express; next stop will be Union Square.” That meant it would bypass my stop and more, so I got off to wait for the next local. On the platform, the loudspeaker announced, “due to a stalled train at 33rd Street (my exit), local trains are running on the express track.”

The next local came quickly, I got on thinking, maybe it would go local, but, sure enough, the loudspeaker announced it would be express, so I exited to the platform. Trains would often unexpectedly go express or local, but after one or two trains, the normal schedule would resume. Not this time. No one on the train seemed to know what was happening either because they hadn’t been there yet — similar to wondering what it’s like “on the other side.”

After getting on and off five or six locals that came and went in quick succession — even after the loudspeaker announced the problem was fixed — and concerned about getting to my event, I decided to leave the station and walk the ten blocks in sub-freezing, windy Polar Vortex weather.

Up the stairs on my way out, I saw a friendly MTA agent, who’d helped me before. It was so funny that she was just standing there ready to assist riders but had no idea of what was going on, so I took a detour and told her what had been happening and that I was headed out. She started moving immediately, saying “let’s go check it out,” so I followed.

As if on cue, a train arrived on the local track with the announcement that it was going local, but when I got on, the loudspeaker said ” . . . going express” (oh no), so I got off the train again. The agent went to the conductor, held the train, and asked her what was up. The conductor replied that the local track was going express. The agent looked to me, so I repeated my tale, noting the announcement said the problem had been fixed. The conductor phoned dispatch; now we were getting somewhere. Meanwhile, the agent was walking down the platform and alerting riders that the train was going express.

Finally, the conductor and dispatch got on the same page and solved the problem! As I got back on the train, I waved toward everyone who was waiting on the platform to come onboard, “Come on! Get on! Get on! It’s going local!”

As we got moving, I felt my face break out in a smile and heard myself chuckle in satisfaction, realizing that, hey, I did that! I moved the subway and helped fix the problem — well, me and the ladies agent and conductor. Pretty powerful, I’d say, especially considering that the event I was headed toward was my friend’s initiative: Feminine Weapon Day — a celebration of women’s power, talents, voices, and intuition. I guess I’d just gotten my money’s worth!

Thinking about it later, as with anything, there were many ways the episode could have gone. I could have walked by the agent and not stopped to tell her — or left my apartment a few minutes earlier, in which case I wouldn’t have been caught up in the delays. She could have been somewhere else or not even working that night. I could have said, no, I’m okay, and continued to walk out of the station instead of following her back down the stairs. I could have let her handle it and not stayed by the conductor’s window. I could have just gotten on the train and not called out to everyone.

Yes, insignificant things. Who cared or noticed? But who knows how those decisions affected all those other people and where they were going and who they were meeting. Not life or death, but one never knows, and who can say for sure? Our thoughts and actions ripple out and those oh-so-little things have the potential to change the world. One blink or turn of the head, one minute later or earlier, who we pass, who we meet, what we see, what we miss.

How many minor decisions and mini-actions change our lives? Your life? The lives of people around you? Just like shoulda, woulda, coulda in reverse, something inside caused the three of us to take action and move on a dime. It began with listening to each other. If, instead, I’d complained and cursed out the system under my breath (like the lady behind me in line today at the Post Office), nothing would have changed. Some people have strong voices and opinions when it comes to righting wrongs, but getting the job done often takes a toll on the people around them in the form of harsh judgment and criticism.

When I lived in an intentional community, I learned to step up, take responsibility, and get the job done. If each of us didn’t, who would? I learned how to collaborate and cooperate. Others depended on me, on us. Of course, many New Yorkers will tell you that this M.O. defines them: they look out for others and get it done. I’d accept that one too.

My twenty years of somatic embodiment practices helped me move forward, use my voice, feel my heart, open my peripheral vision, take a stand, and find center. The idea is that when you train center in your body, you can more effectively respond in the moment and step out of reactive patterns. That night, I was able to do that: do something spontaneously with others that resulted in getting the trains running smoothly. I’ll take that as my celebration.